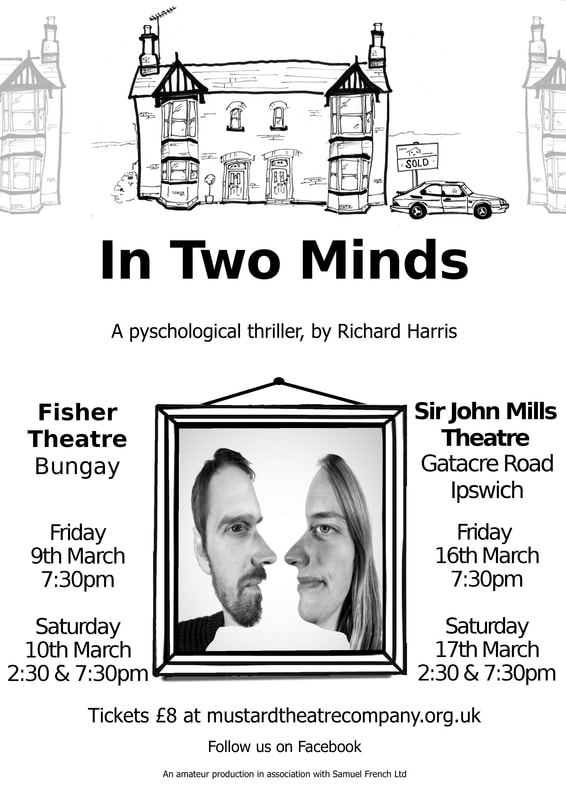 In Two Minds – by Richard Harris
“In Two Minds” is a psychological thriller, with a hint of comedy, it tells the tale of David and new partner, Annie, who have moved happily into a Victorian house where the vendor has emigrated, leaving furniture and a welcoming bottle of champagne. But strange events cause David's negative thoughts to rise. Their vaguely sinister neighbour is married but where is his wife? Women's clothing is found burnt in a garden incinerator. David seems ready to accuse everyone of everything. Annie can cope with his doubts and insecurities, but will his suspicious mind drive them apart?
This play is sure to keep audiences guessing up to the very last minute. Our cast found the story total compelling when they read it for the first time and they are committed to bringing that tension to their performances.
Richard Harris is best known for his award-winning comedies “Stepping Out” and “Outside Edge”.

Comments from the audience:
I liked the contrasting characters, the dialogue and the way it switched from scene to scene keeping you guessing all the way through.  The acting was high quality and I loved not being sure what was happing - puzzled - which of the two were right?  But I felt slightly let down by the end. Not sure why. I think it was because it was so clevery written, with all it's twists and turns but the ending didn't somehow live up to that. I must say that I usual have problems catching what people are saying and so it was refreshing to be able to hear every word